This originally appeared on Stuff.co.nz

Veronica Harwood-Stevenson stands quietly in Queensland bush, net poised. Amid the thrum of kamikaze giant bumblebees, assassin bugs that harpoon honeybees and electric-blue flying jewels, she’s scanning for a tiny black bee with a gold badge on its back.

Every morning and evening for a week and a half, Harwood-Stevenson swatted the air in pursuit of the native bee whose nesting material she hopes could be a non-toxic replacement for waterproofing plastics. It’s a long way from her previous start-up business, selling lingerie for big-boobed women.

Catching the bees was only half the battle. To understand how they make the cellophane-like bioplastic that lines their nests, she had to keep each specimen alive until she had enough bees for an entomologist to dissect. Each little bee – measuring just 8-10mm in length – had to be cushioned with cotton wool and fed with sugar water. Of the 40 bees collected, she lost only one – its wings caught in a droplet of sugar water and it drowned.

“The ones I caught first got a little bit depressed, so I took them out for walks. But then they started getting feisty and wanted to fly away and wouldn’t go back in their little jars.”

And then there was the bushfire that forced her evacuation; and the harried trip to Brisbane to meet entomologist Phil Lester, where she ended sprawled on the train floor, with hot coffee all over her bee box. “It was hard,” Harwood-Stevenson says simply. 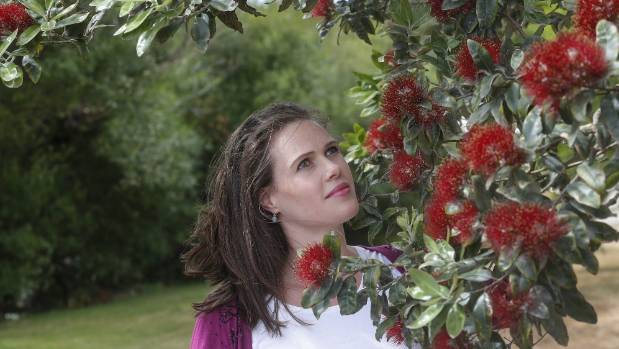 Harwood-Stevenson‘s Wellington start-up business Humble Bee has been promised up to $120,000 from Callaghan Innovation to try to make a comparable synthetic version of the bee nest lining. Initial fundraising brought in $160,000 and she’s hoping to raise another $500,000 in a second investment round.

Humble Bee has been more than seven years in the making. Growing up on a Maniototo farm, Harwood-Stevenson was a natural investigator, scaring skinks so they’d shed their tails, then measuring how long they took to grow back. She studied science at university, but got distracted, starting a lingerie company and working in cosmetics. 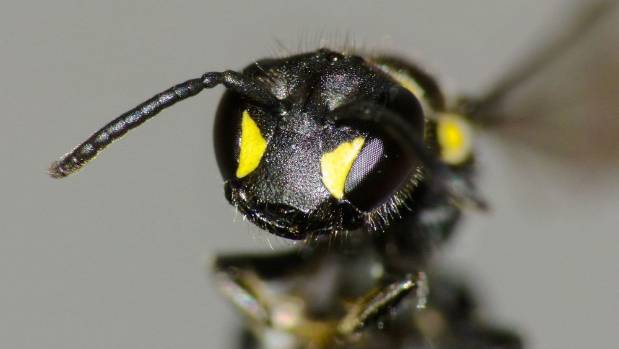 One of the New Zealand species of hylaeus native bees, Hylaeus relegatus.

Missing science, she read scientific journals for fun. A throwaway line in a native bee research paper lodged in her mind. It was about the structural benefits of the cellophane-like nesting material incubating the bee larvae. “I wonder whether or not this would make a good bioplastic,” the author mused. Incensed at the world’s endless plastic pollution, Harwood-Stevenson wanted to answer that question.

All she had to do was find some bees and bee nests – how hard could that be, right? The bees in question were from the native Hylaeus family. Trouble is native bees aren’t like social, hive-dwelling, see-my-stripes introduced honeybees. They’re mostly black and tiny and make single nest holes in old logs or natural straws.

“I tried to find these bees – they are literally a biological needle in the haystack. They’re solitary, there are quite a few different species of them, they’re certainly not bred or kept in any way like honeybees and there are very few people who know anything about them.” 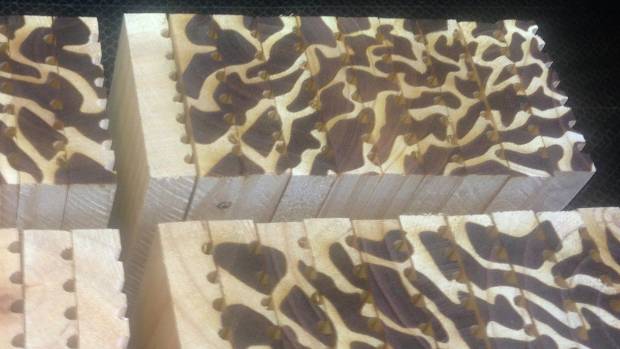 Harwood-Stevenson has sent out nesting boxes – which she got a film props company to laser-dapple to mimic shade – in the hope of finding more specimens of New Zealand hylaeus bees.

There’s little hard data about New Zealand’s native bees, but research suggests they’re threatened by changing land use and an explosion of competing honeybees. Harwood-Stevenson studied native bee guru Barry Donovan’s 1990s research into bee distribution: “I was looking at the map and going – that’s gone; that’s gone; that’s been intensified. They can’t not be in trouble.”

An All Points Bulletin seeking sightings of New Zealand’s Hylaeus bees was answered by a bug enthusiast Dunedin boy. Harwood-Stevenson found a couple more on his hebe bushes, but it wasn’t enough. She’s still interested in the New Zealand species, and has sent bee apartment blocks to Dunedin and the West Coast in an attempt to find specimens. However, she eventually settled on an Australian species, Hylaeus nubilosus, which was easier to come by. 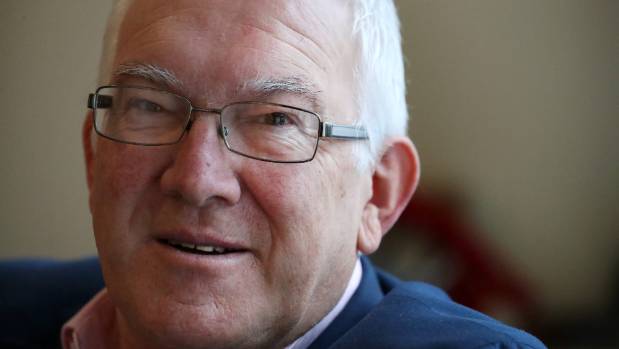 Harwood-Stevenson tracked down an Australian naturalist who pollinates macadamia orchards with stingless native bees. A Grow Wellington prize paid for him to find nesting material, which was analysed by AgResearch. She expected the nest lining to repel water, but it also resisted naked flames, high temperatures, strong acids and alkalis.

Despite the promising results the project stalled, until Harwood-Stevenson met veteran Wellington chemist Richard Furneaux. While the Ferrier Institute director is rarely hands-on these days, he was so inspired he spent his holidays reading native bee research.

“It’s just a beautiful story,” Furneaux says. “I’m leading the science on this one. This is too good to be true.” 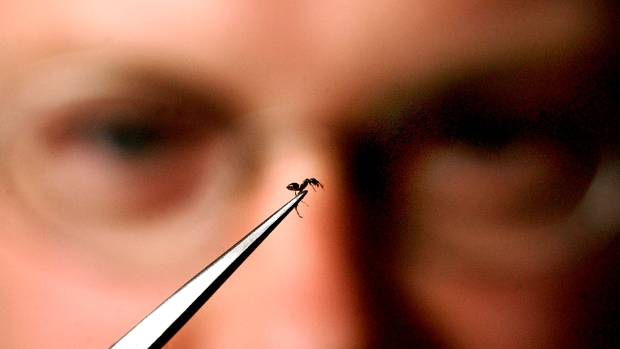 Victoria University entomologist Phil Lester was worried about “stuffing up” dissecting the native bees to remove their glands. However, they were easier than the even tinier ants he has previously researched.

Once she knew the bioplastic’s properties, Harwood-Stevenson needed to work out how it was made. So in January 2017, she flew to Queensland to collect bees, which she delivered to Victoria University entomologist and professor of biological sciences, Phil Lester.

When you watch someone dissecting under a microscope, it looks as if they’re doing nothing – the movements are so fine, Harwood-Stevenson says. Lester’s task was to remove the bee glands intact, so the bioplastic polymer inside could be extracted and analysed. He was so worried about wasting precious bees, he practised on old specimens first.

“It’s not easy and you stuff it up, periodically,” Lester says. “You do the dissection and go – I can’t find that gland anywhere. Or it’s very easy with the slip of a very fine pair of forceps to obliterate a bee.” 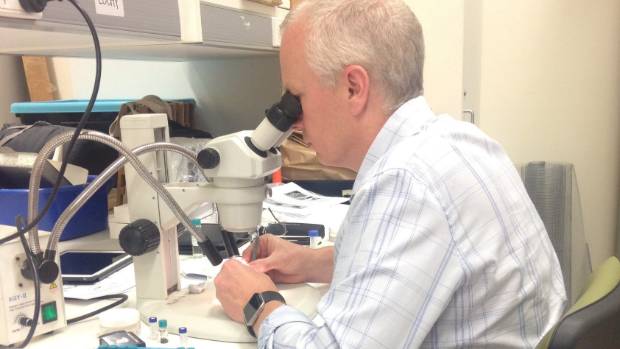 Harwood-Stevenson says the process of dissecting the bees to remove their glands was so fine and precise, it looked as if Lester’s hands were not moving.

Nonetheless, he successfully removed enough glands for Furneaux’s team to identify the secretion’s chemical building blocks. Now they have to try to make it – with the same water-resistant and other properties as the natural version.

If it works the potential is enormous – as well as a possible non-toxic, biodegradable replacement for waterproofing fabrics, the polymer’s fire-retardant properties could make it useful for aviation, electrics and construction, and its resistance to strong acids and alkalis could protect drugs needing to pass through the stomach unharmed. 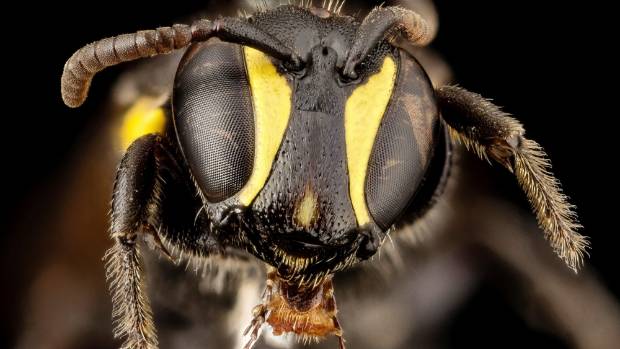 Veronica Harwood-Stevenson chose the Australian native bee, Hylaeus nubilosus, because it was easier to come by than its New Zealand cousins.

Ultimately, the plan is to identify the genes used to produce the bioplastic and insert them into the genes of a designer microbe, which can then manufacture it at greater scale than chemists could synthesise it. It’s the same process used to make insulin.

Harwood-Stevenson hopes to have a bioplastic ready to sell in five years, but she knows it’s still a long road to success. There will be more hours in the wilds of Queensland collecting bees, but for now she’s swapped her knackered net for the corporate look of a start-up CEO. 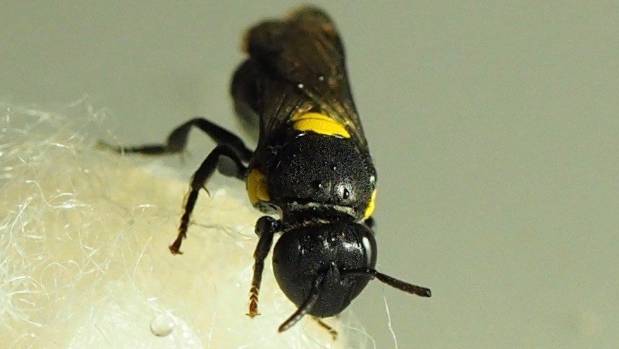 Above: One of Harwood-Stevenson’s hylaeus nubilosus bees, on its cotton wool pad.